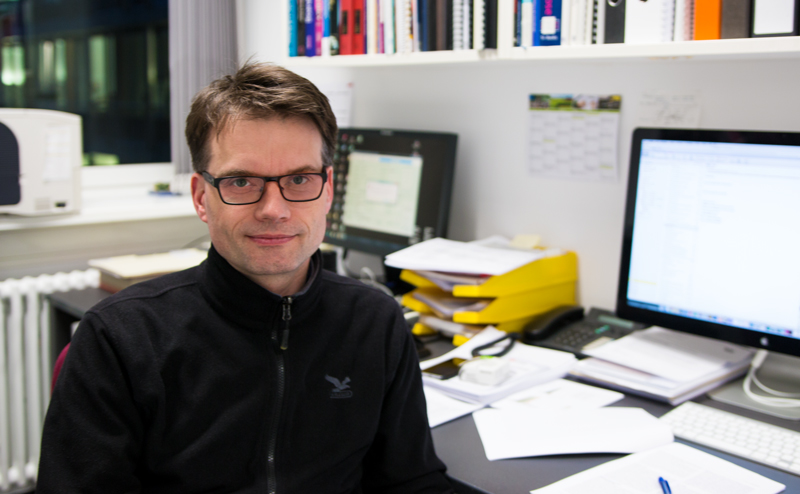 Thomas Korn obtained his MD from Würzburg University Medical School, Germany, and received a postdoctoral training with Vijay Kuchroo at the Center of Neurologic Diseases, Harvard Medical School, Boston, USA. He is a board-approved Neurologist and senior physician at the Klinikum rechts der Isar of the Technical University of Munich. He holds a professorship in Experimental Neuroimmunology at the Technical University of Munich, Germany. He studies the biology of pathogenic and regulatory T cells in the context of autoimmune inflammation in the central nervous system. 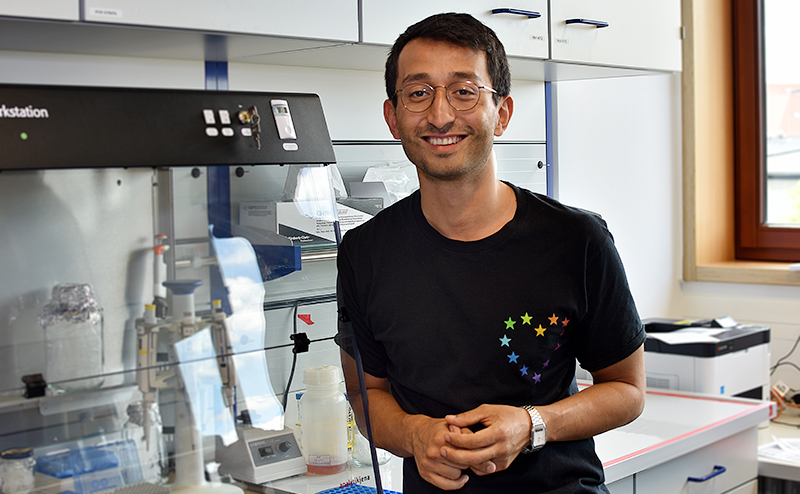 Ali Afzali is a clinical scientist who joined the lab in 2018, shortly after he began his residency in Neurology at the University Hospital “Klinikum Rechts der Isar”.

With the end of his medical studies at the “Westfälische-Wilhelms Universität” (WWU) in Münster in late 2016, Ali completed his medical doctoral thesis in the context of idiopathic inflammatory myopathies in the lab of Prof. Dr. Dr. Sven Meuth. For this, he received the award for the best medical thesis at the WWU and the young researcher award from the “Deutsche Gesellschaft für Muskelkranke e.V.” (DGM).

Currently, he is investigating tolerance mechanisms against Aquaporin-4 in mouse models of Neuromyelitis optica in collaboration with the Klein lab from the LMU with a special focus on T cell negative selection. Other research interests include the investigation of retinal pathology in the context of experimental autoimmune encephalomyelitis using optical coherence tomography (OCT). 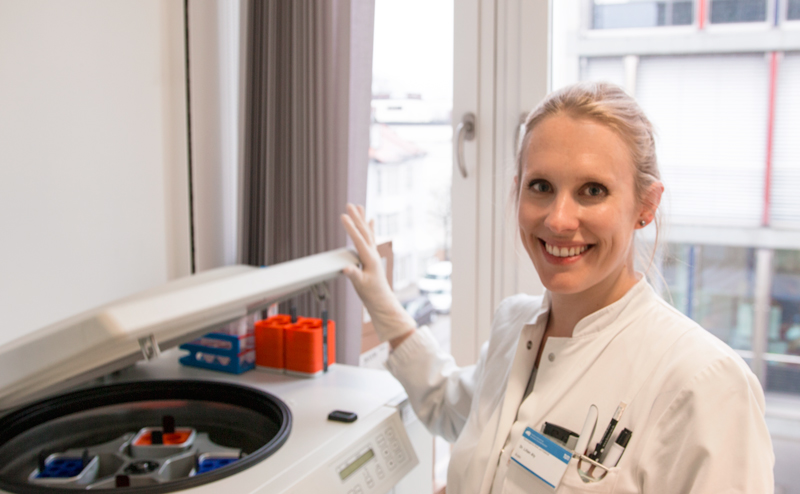 Lilian Aly studied medicine at the Universities of Hamburg and Zurich and started her residency in 2014 at the Department of Neurology and the Klinikum Rechts der Isar (Technical University Munich) focusing on neuroimmunology.

She completed her MD thesis at the Institute of Neuroimmunology and Multiple Sclerosis in Hamburg with the characterization of JC virus-specific CD4+ T cell epitopes in healthy individuals. During this time, she participated in the graduate School “Inflammation and Regeneration” and received scholarships by the German national academic foundation and the YAEL-foundation. Further devoting herself to human T cell immunology, she investigated FTY720 effects on regulatory T cells in healthy individuals and multiple sclerosis patients for six months in Howard Weiner’s laboratory at Brigham and Women’s Hospital (Harvard Medical School, Boston, USA) after completing medical school.

Lilian Aly joined our group in 2015 as a clinician scientist. She is currently investigating the role of dendritic cells in germinal center responses and receptor expression patterns across distinct T cell subtypes. 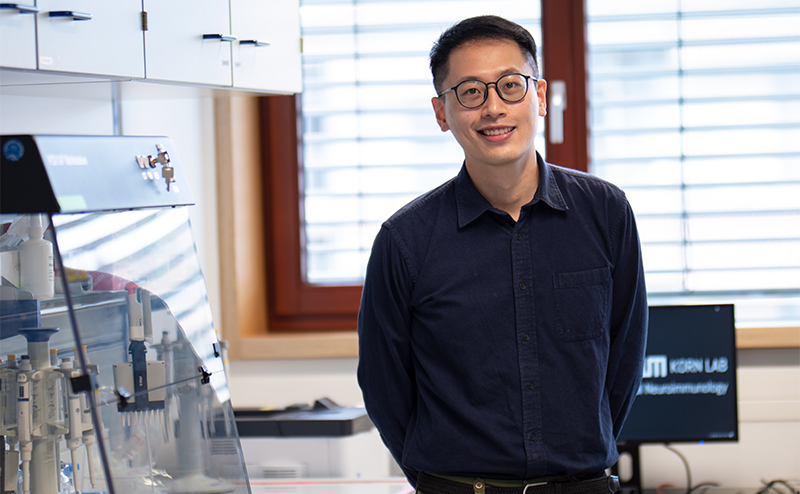 Hsin-Hsiang Chen received an MSc in Immunology from the Graduate School of Immunology at National Taiwan University School of Medicine, Taiwan in 2019. He has been interested in revealing cytokine responses and signaling transduction in the immune system, particularly in type I IFN and signal transducers and activator of transcription (STAT). Under Professor Chien-Kuo Lee’s supervision, he has previously elucidated the role of IFN-I and STAT1 signaling in both pDCs and B cells to positively modulate humoral immunity.

He joined our group in July 2021. He currently aims to characterize the properties of Tregs that regulate the autoimmune response in the central nervous system. 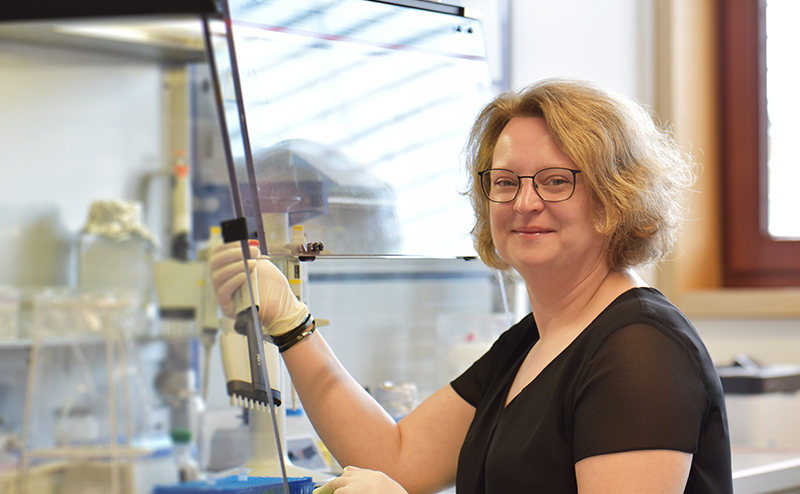 Sylvia Heink studied biology at the University of Leipzig and the University of Campinas, Brazil. In 2000, she joined the Institute for Biochemistry at the Charité University Medical Center Berlin for her PhD studies and characterized the biogenesis / turnover dynamics of immunoproteasomes. In 2004, she started to work on T lymphocytes causing CNS autoimmunity as a postdoctoral fellow at the Institute for Immunology in Jena.

Since 2010, she is a postdoc in our group and continues to analyze factors like the cytokines IL-6, IL-12 and IL-23 in modulating the differentiation / stability of encephalitogenic Th17 cells. 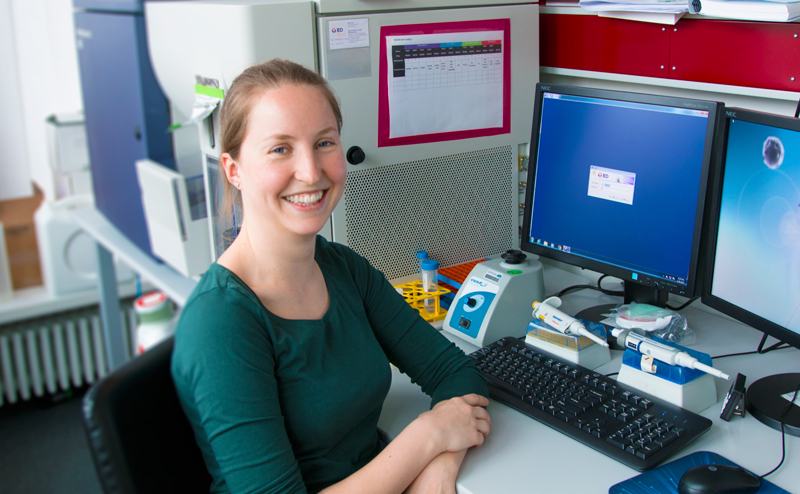 Veronika Husterer received her vocational training at the BBZ Ingolstadt and worked for a few years in a microbiology lab. She joined our group in 2012. Besides genotyping and lab organization her main areas of expertise are mouse preparations, cell culture and various special methods in immunology and molecular biology. 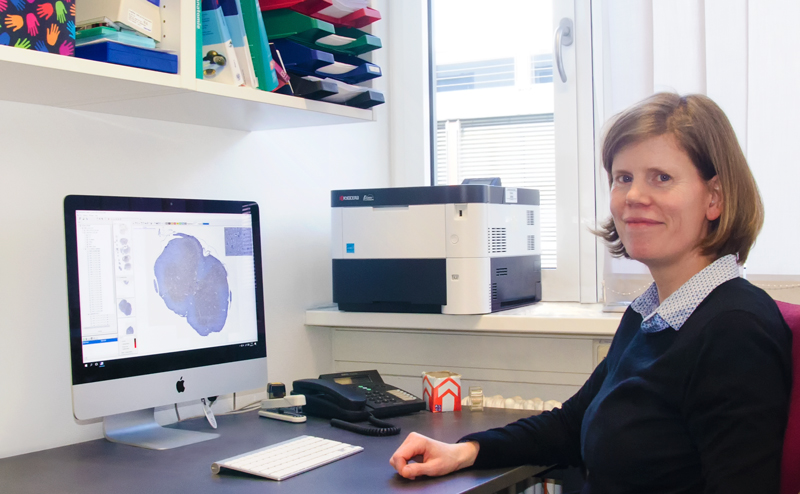 Meike Mitsdörffer studied medicine at the Ernst-Moritz-Arndt University Greifswald, at the Albert-Ludwigs University Freiburg, at the Eberhard Karls University Tübingen, at the Johns Hopkins University in Baltimore (USA) and Stellenbosch University (South Africa).

In 2004 she completed her MD thesis characterizing the role of HLA-G in gliomas and inflammatory myopathies at the University of Tübingen. In the same year she started her residency in Neurology at the University hospital Tübingen. From 2007 to 2010 she took a break from clinics for a postdoctoral fellowship in Vijay Kuchroo’s Lab (Harvard Medical School, Boston, USA). At that time she started to focus on the role of B cells in the pathogenesis of CNS autoimmunity. Subsequently, she continued her residency in Neurology, initially in Zurich (Switzerland) and since 2011 at the Department of Neurology of the Technical University hospital in Munich.

She is now working as a clinician scientist and is particularly interested in the pathogenesis and treatment of Multiple sclerosis. To further understand the differential role of B cell in CNS autoimmunity she employs a spontaneous and B-cell dependent EAE model. 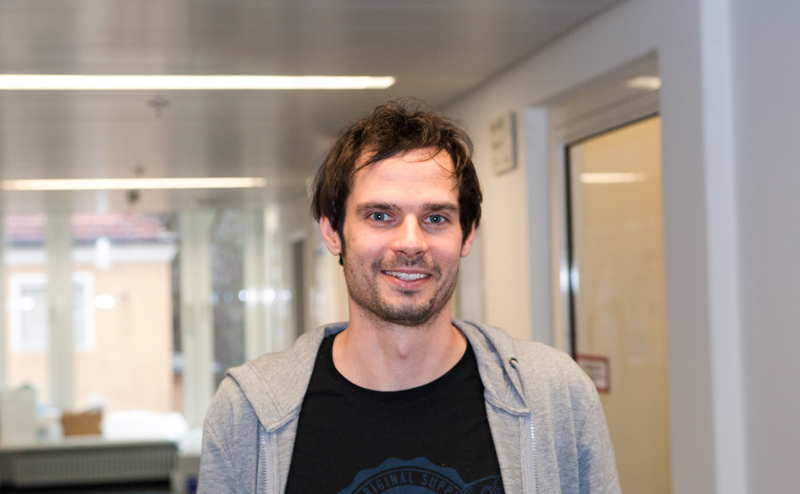 Andreas Muschaweckh studied Biochemistry (B.Sc.) and Molecular Biotechnology (M.Sc.) at the Technical University Munich (TUM). After graduating from TUM in 2008, he pursued his doctoral degree at the Institute of Virology (TUM/Helmholtz Center Munich) studying the mechanisms governing the local generation of tissue-resident memory CD8+ T cells after acute viral infection of the skin. Since 2013, he also worked in a collaborative project with the Department of Experimental Neuroimmunology investigating the role of α4-integrins in the CNS trafficking of protective T helper cells during viral encephalitis.

Since 2015, he works as a postdoctoral scientist in the Department of Experimental Neuroimmunology, where his research currently focuses on understanding the regulation of peripheral γδ T cells during homeostatic and inflammatory conditions. He is also interested in CNS-resident memory T cells and their contribution to CNS autoimmunity. 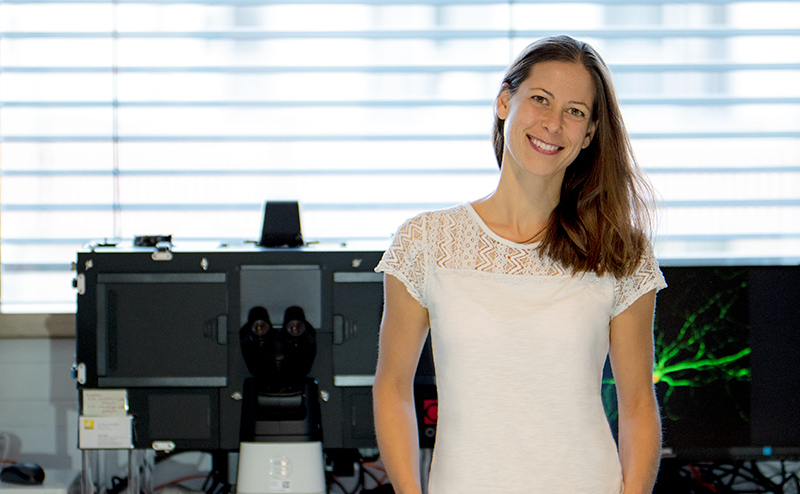 Lucy Nirschl studied Molecular and Technical Medicine (B.Sc.) at Furtwangen University where she specialized in clinical imaging. She started working at Klinikum rechts der Isar in 2018 when she joined the Experimental Gliabiology group of Veit Rothhammer.

In November 2021, she joined our group as a research technician and is concomitantly completing her Master of Science (Technical Physician) by characterizing AQP4-specific TCRs in the context of Neuromyelitis Optica. 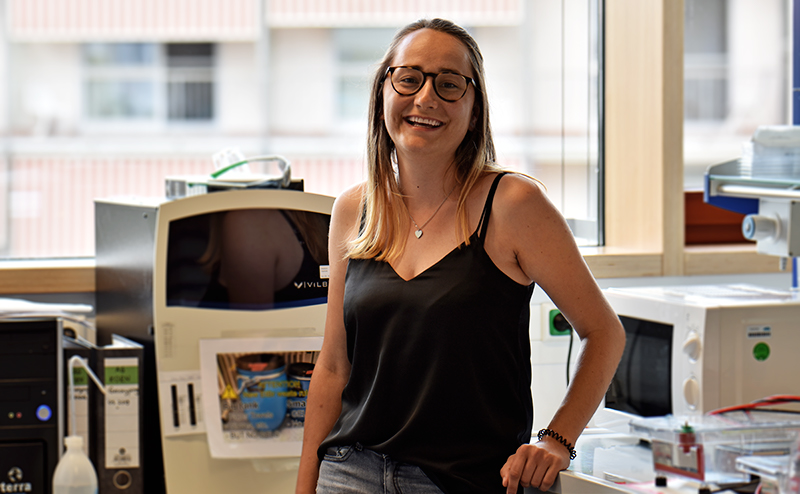 Monika Pfaller studied at the University of Regensburg where she obtained a B.Sc in Biology. She started working at Klinikum rechts der Isar in 2016 when she joined the Translational Neuroimmunology group of Klaus Lehmann-Horn. She specializes in B cell receptor chain sequencing, molecular biology and mouse research. In March 2020, she joined our group to refine her expertise in neuroimmunological methods and is currently supervising lab organization. 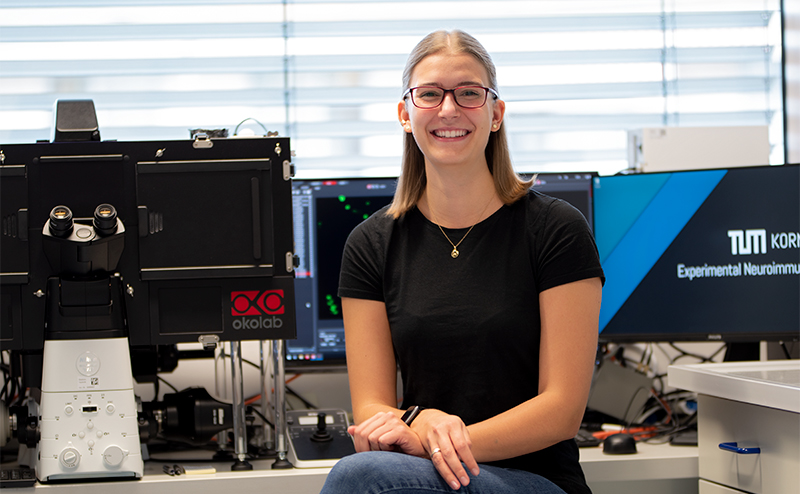 Lisa Richter studied Biochemistry (B.Sc. and M.Sc.) at the Technical University of Munich (TUM). During her Bachelor studies, she investigated the dynamic rearrangement of the cytoskeleton and invasive features of dendritic cells. In her Master’s Thesis, she used whole-cell patch-clamping to analyze the electrophysiology of nerve cells in the presence of various pharmaceuticals.

Lisa joined our lab as a PhD student in July 2021 and is currently working on factors for priming of pathogenic and non-pathogenic Th17 cells in the context of experimental autoimmune encephalomyelitis. 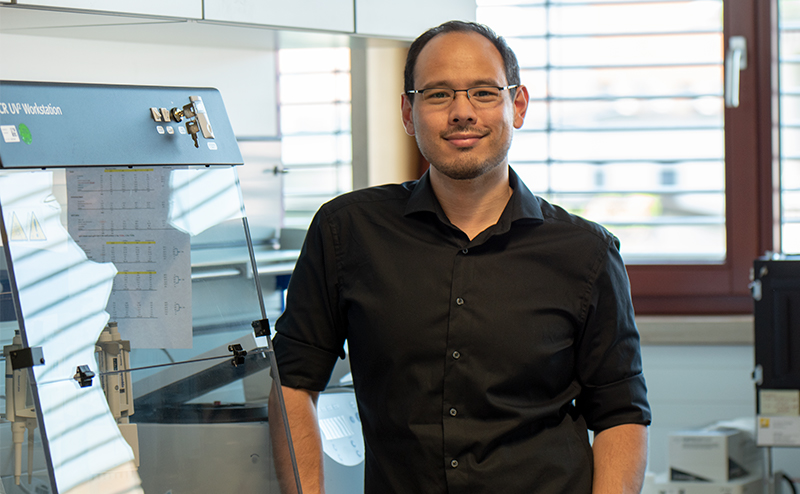 Christopher Sie studied Molecular Medicine at the University Medical Center Göttingen where he specialized in immunology by working on diabetic T cell metabolism with Holger Reichardt at the Institute for Molecular Immunology, on Melanoma immunosuppression with David Schrama at the University Hospital Würzburg, and on T cell migration in preclinical EAE with Alexander Flügel at the Institute for Multiple Sclerosis Research.

He received his Master’s degree in 2011 and joined our lab in 2012. His doctoral work was supported by a Boehringer Ingelheim Fonds PhD fellowship. For his thesis, he analyzed the role of alpha4 integrin in DC migration. He has recently concluded our project on Th17 autoregulatory cytokines and is now specializing in computational science. 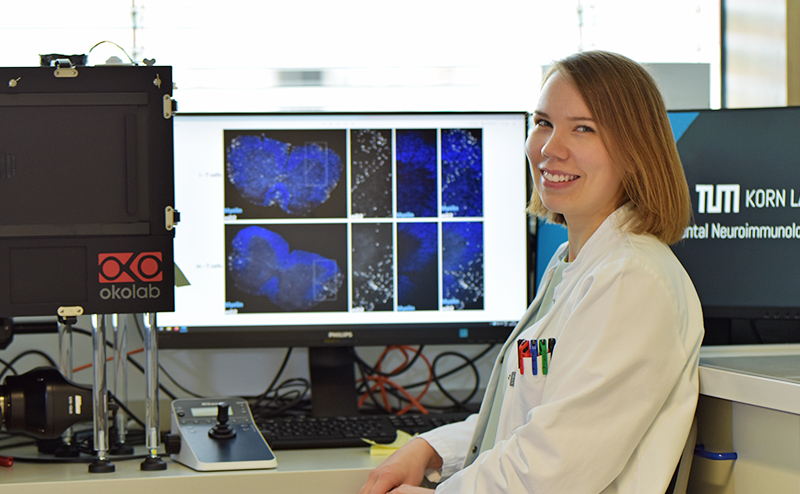 Sofia Tyystjärvi studied Biochemistry (B.Sc.) and Molecular Systems Biology (M.Sc.) at the University of Turku (Finland) from 2013 to 2019. During her studies she worked as a research assistant and focused on the developmental origin of macrophages in the mammary gland and ovaries. She did her Master’s thesis at Karolinska Institutet (Sweden) on macrophage targeted cancer immunotherapy. She joined our group in January 2020 as a PhD student and is currently investigating T cell priming and trafficking in the animal model of multiple sclerosis.